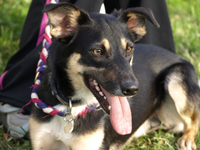 Rescued from: Many Tears Animal Rescue in 2007

With Phee’s health in question it was time to start looking for another dog, I wanted a boy, another rescue and one that would fit nicely into our pack but would excel at Agility. So I was looking for a submissive dog with an ‘on’ button. I saw Kif (then Harry) on the Many Tears rescue site, along with two other collies which caught my attention, Mum and I took a day off work and decided to travel the country and see them all in one day…. we never got any further then Kif.

We are not sure of Kif’s background, we knew that he was a failed sheepdog, but that was it. We think he must of lived outside previously because he was afraid of doorways and cars. He spent the first couple of months we had him looking for someone, a man, that he obviously missed very much, if he caught sight or sound of a man on a walk he would travel a distance to be with them, realise it was not who he thought it was and then be afraid to return to us. He was very fond of my Dad, brother and boyfriend, but didn’t seem that fussed by myself or my Mum.

Kif was very hard to train because he did not understanding the concept that if you do something good, you get a reward. He wouldn’t take treats, he didn’t know what a toy was and he certainly didn’t want to be touched. But one thing Kif did enjoy was watching agility so we used this as his motivation and we were soon able to introduce a tuggy toy and after some time he would take food from us but whilst we could do basic agility we were still unable to stroke him and he would still not look us in the eye. We also found Kif to be noise sensitive which left me unable to work him indoors, and which left Kif with a fear of see-saws and the bang they make which had to be worked on and for which we owe Toni Keating and our SWAT buddies a great deal of thanks for their help, time and patience.

I must admit whilst the agility training has been myself, my Mum has put so much time and energy into trying to make Kif ‘normal’ and help him overcome his issues and it really is a thankless task with him; he is one of the weirdest dogs we have ever met.

Kif came out into the Agility world in 2008 and was always very consistent, and very tuned into my body, he couldn’t put a paw wrong… unless I sent him there! But he now lives a much more fulfilling life with my Mum and Dad in France. They live in the middle of no-where which is perfect Kif, it’s a quiet life with lots of countryside to explore and run around in.