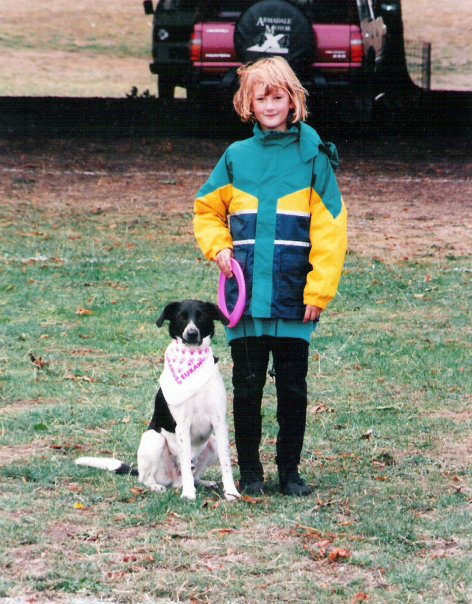 Without Scrappy dog, there would never have been a ‘Purple Posse’, or indeed an ACAI 1st Class Instructor writing this piece. What would I be doing instead of Agility? Goodness only knows!

Scrappy was the founder member of the pack, the stereotypical ‘family pet’ acquired from the RSPCA when I was 5. If you believe in fate; that itself was some kind of miracle because due to an admin error, he wasn’t the black and tan terrier Mum and Dad had originally chosen on New Year’s Day 1990. Nor was he on display at the kennels when they went back to re-chose another dog that resembled the ‘Scrappy Doo’ dog we had named a week earlier (whilst awaiting a home check).

From what my parents report, they looked extensively for a Black and Tan terrier but when they were showed a barn full of puppies, not yet on display (3 litters, all black and white, no terriers!), they spotted Scrappy… well he spotted them and whilst the other pups careered around their feet and played with each other Scrappy fixed a stare on my Dad and the deal was sealed.

Little did Dad know that when he responded to that stare he was putting into motion an obsession that would take over our lives, lead 3 of us into the sport and start a legacy of dogs to follow in his footsteps and my brother and I never did notice he wasn’t a short black and tan dog!

Scrappy started obedience lessons with Mum to learn how to be a ‘good boy’, Mum’s competitive nature took hold, and she was soon competing at obedience shows, and doing well for that matter. But it wasn’t until she found agility that she realised just what she and Scrappy were missing out on and it was ‘so long’ to the obedience and ‘hello’ to agility.

Scrappy was an extremely biddable and trusting dog to train and very forgiving so when I wanted to give it a go in training at just 7 years old, the answer was ‘why not?’ and I was in the ring competing with him the following year.